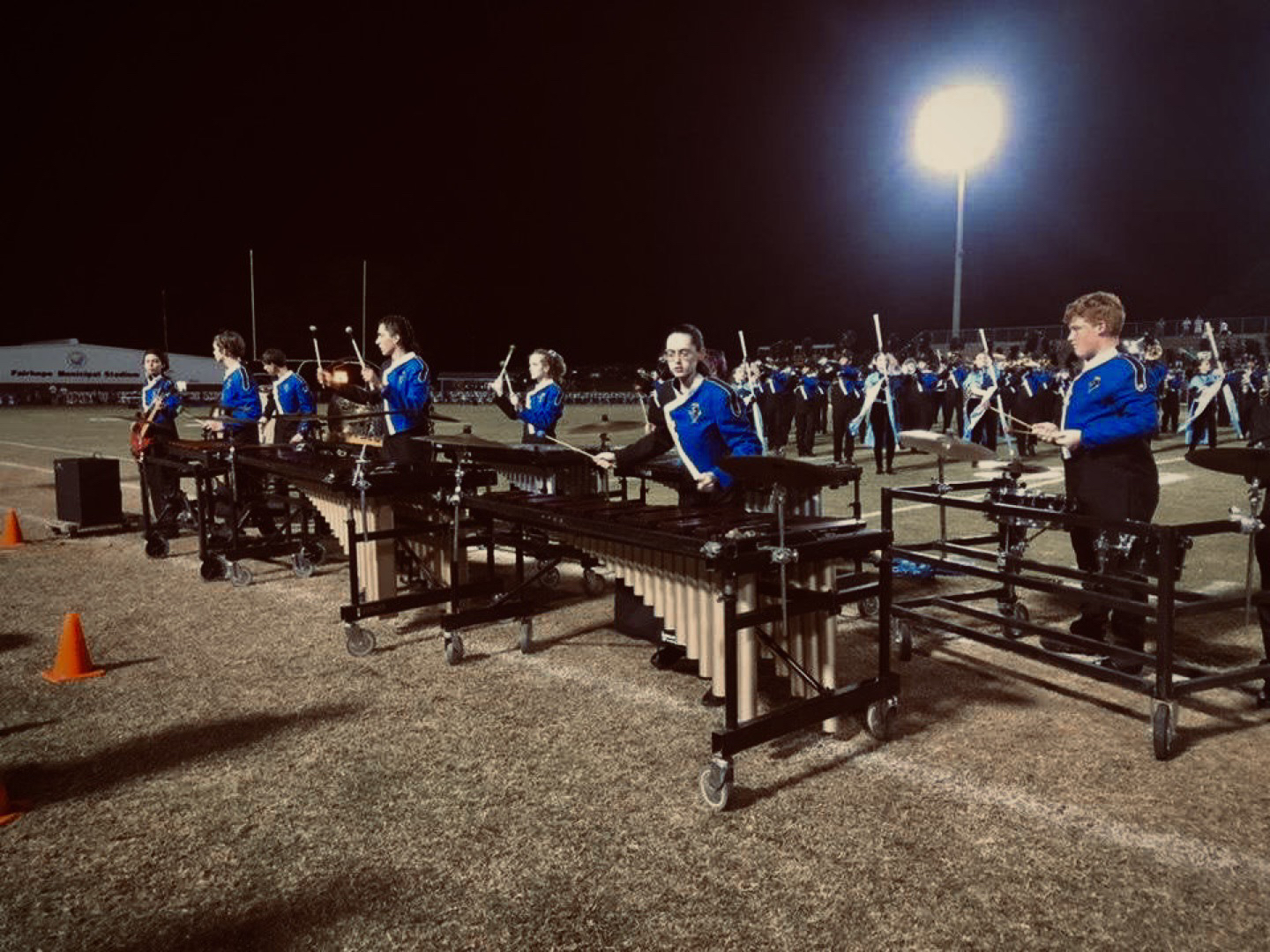 Time to shine. Front ensemble plays their part during the half time show. Members played their parts in the game performance to prepare for upcoming competition. (Submitted photo.)

Time to shine. Front ensemble plays their part during the half time show. Members played their parts in the game performance to prepare for upcoming competition.

FAIRHOPE, Ala.–The Fairhope High School band received new uniforms for the 2022 season. Students and staff are excited to show off their new look and new music.

Senior section leader Huff Friedman thinks the uniforms this year are more “modern and updated” than last year. He likes that the colors are school colors, royal blue and gold.

Although the uniforms looked good last year, the zippers and buttons on the uniforms were falling off. They were also very outdated.

Senior Mali Sok has been in the band for four years and currently serves as a drum major at FHS.

“[The uniforms] are really cool; they’re very sleek and modern. I also like how the drum major uniforms are white against the black jacket,” Sok said.

Sok said last year’s uniforms were more plain and traditional than this year’s. The drum major uniforms were black with little gold on them.

“I like that we have lots of colors,” Sok said.

Being a drum major isn’t easy either There’s a lot of pressure that comes with the job. A drum major has to be responsible for things everywhere, in and outside school.

“You have to show up in a good mood all the time,” Sok said.

The role of drum major is not always what recipients expect. People approach them more often than other band members, yet they make numerous friends being a leader of the band.

“It’s relatively hard [being a section leader], especially being a percussion leader. It is very easy to rush the speed of the song playing drums, and the drum is what keeps time for the band,” Friedman said. “It’s going great in each section and the only thing we need to work on is finishing learning and memorizing the final song of the new show.”

There’s a relatively large drum line this year, and everyone is picking up the music quickly. Friedman is excited about competition this year.

Sok describes this year’s show more as a concept than a concrete idea.

“I personally liked last year’s show better because it felt like there was more of a story to it,” Sok said.

The band will be performing at Baker Stadium in Mobile, Alabama, September  16, during halftime of the Davidson High School game.