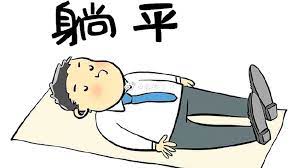 FAIRHOPE, Ala.– Beginning in April 2021, lying flat, a cultural movement in China, calls out the academic performance pressure put on students. Adolescents execute their personal rights by choosing to lie flat, complete no work while life passes by, rather than doing what they can.

What does it mean to lie flat? Have you ever had a surplus amount of work to do or felt the expectation of perfection, whether it be academic, social or physical, weighing on your shoulders? In China, academic prestige is demanded, especially among adolescents. Lying flat is choosing to do nothing rather than even what is possible.

Lying flat or tang ping is the term used to describe the decision made by those who feel there is too much work to do, too often, causing burnout. Sometimes, students have a lot of work to complete, which is comprehensible. But quite often in China, and in Fairhope too, youth are pressured to build their resumes and pile on incomprehensible tasks they will later regret.

“Lying flat is due to a thing called involution,” Wu said. “Involution is a situation where you’re competing with other people, putting more and more effort into [a subject], but you’re not getting many returns back. An example of this might be everyone in class works, particularly hard, and your ranking in the class may not go up, even though you have put a lot of effort into it.”

Many of the problems of academic adolescents come from the pressure to fill up the resume when applying to colleges, rather than putting effort into one’s personal passions. When students compare their pursuits and even personality to others, they lose the ability to value their areas of interest and expertise.

Students should focus on climbing their internal ladder to success, whatever that may be, rather than the ladder society says they must have.

“Individuals are encouraged to work hard at a young age, with the belief that hard work will always result in progress, and everyone has equal opportunity to succeed,” Wu said.

However, as an individual grows up and is exposed to inequity they realize equal opportunities.

“Does the popularization of the concept of lying flat symbolize a widespread existential crisis among Chinese youth?” Wu said.

Frequently, people post on social media that they do not want to work anymore and want to lie flat; however, they continue to complete the work and tasks previously stated as not worth it. Because lying flat grows from outside pressure causing wavering internal views on how to live life, “a large part of the phenomenon is authenticity” according to Wu.

In a society where everything is measured, generalized, and broadcast to the world for others to form opinions, why wouldn’t it be easier to lie flat? Questions like these show how lying flat can be categorized as an existential crisis, a psychological episode in which a person questions the meaning of their life and of existence itself.

The way out of a cycle of lying flat can be found through examining the purpose and meaning behind the work one views as overwhelming.  Then deciding whether the effort is effective and worth the outcome, or if there are other intentions that appeal and need to be examined.

Lying flat seems to be a method used to be heard and related to by others. One can also feel social pressure from peers and adults when they feel obligated and restricted to talk about certain topics in order to fill a space. While the term lying flat was created in China, students in all sorts of avenues go through at least one period where they yearn to find purpose and meaning behind what seems to be endless busy work.